Tom Deckard had a vision from the Lord about the future of America and the people in the nation. He was shown that there would be a time in America when people would steal food from one another. The people would break in and ravish the stores. The people would go into all the grocery stores and take everything they can get. People will go door to door and murder people to steal the food out of their there homes.

The Lord said "So Shall it be. Prepare the people for the time will come."

Blood is going to run in the streets of America.There is going to be famine in the land and you will see men die of starvation.

The government has become God and they will come down on us like raving wolves when the time comes. The government will not help with anything, they will look at the plagues that will come and sit back and watch.

Millions will die here in the streets of America. 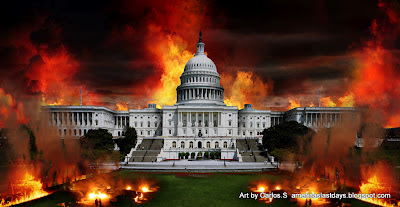 The Lord said "So Shall it be. Prepare the people for the time will come."