4 blood moons on Jewish feast days within 2 years in Israel is very rare and it has only occurred 7 times since the the time of Jesus. 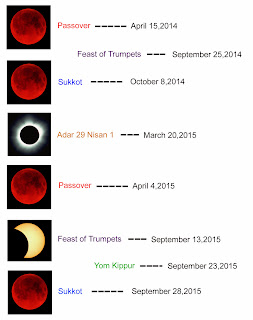 Every time a blood moon pattern has appeared on Jewish feast days a big event effects the nation of Israel. The event effecting Israel  begins to start just before the actual years of the blood moons.
To understand what will happen in the 2014-2015 blood moons you must understand the pattern of blood moons in the past.

Past Blood Moons in History

The blood moons show a pattern of Jewish persecution and New land for Israel after a time of war.
This means that the blood moons of 2014-2015 will be a time of war or persecution for the Jewish people. This may Lead Israel to Gain and or Loose land during this time.
As of 2011 there has been a war of a crisis in the middle east that has ignited violence and uprisings in Egypt, Libya, Syria, Yemen and soon to be other middle Eastern nations.These Nations are at war and have increased the danger for Israel and a nuclear Iran in the coming years. The administration of America has increased the leadership of the Muslim brotherhood creating a more Fanatical terrorist state that threatens Israels existence as a nation.

As of  2012 The world is on the edge of a financial collapse that will destroy the economy of Europe and America, one of the lone supporters of the nation of Israel.  Keep in mind that Barack Obama has declared the position of the United States is to divide the land of Israel to pre 1967 borders for the creation of a Palestine state within Israel.
John Kirkpatrick has prophesied by the word of the Lord that if Israel creates a Palestine state by the pressure of the presidency the land of America will be divided by a massive earthquake in the middle of the nation.

In conclusion 2013-2014 will provide the leading events in the next 2014-2015 blood moons that are predicted to occur. The events may involve war in the middle east and a financial crisis around the world that will effect the land Israel or the Jewish elite new york city.