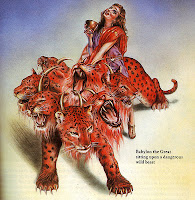 America is Mystery Babylon in Revelations chapter 17 and 18 and will be destroyed by a nerve gas attack and nuclear explosion followed by its complete destruction in a tsunami.  This destruction will be at the end of the 7 year Tribulation in a Russian invasion of America. Mystery Babylon also sits on a scarlet colored beast which represent Americas control over the 7 world super power's that have ruled the nations of the earth in the past and future.  She is the great city that rules over the kings of the earth which is new york city. This city is described as being a great city that is filled with wealth, merchandise, strength, musicians, artisans and ship masters. There is clearly no doubt that Mystery Babylon is New York City and the nation of America.

Revelation 17
1 And there came one of the seven angels which had the seven vials, and talked with me, saying unto me, Come hither; I will shew unto thee the judgment of the great whore that sitteth upon many waters:

Mystery Babylon is a Great whore that sits upon many waters.
This is the statue of liberty Island. 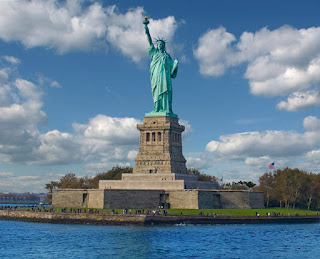 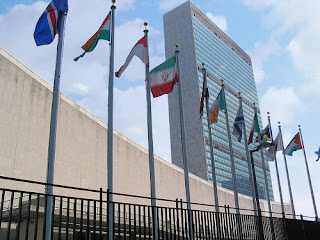 3 So he carried me away in the spirit into the wilderness: and I saw a woman sit upon a scarlet coloured beast, full of names of blasphemy, having seven heads and ten horns. 4 And the woman was arrayed in purple and scarlet colour, and decked with gold and precious stones and pearls, having a golden cup in her hand full of abominations and filthiness of her fornication: 5 And upon her forehead was a name written, MYSTERY, BABYLON THE GREAT, THE MOTHER OF HARLOTS AND ABOMINATIONS OF THE EARTH. 6 And I saw the woman drunken with the blood of the saints, and with the blood of the martyrs of Jesus: and when I saw her, I wondered with great admiration. 7 And the angel said unto me, Wherefore didst thou marvel? I will tell thee the mystery of the woman, and of the beast that carrieth her, which hath the seven heads and ten horns. 8 The beast that thou sawest was, and is not; and shall ascend out of the bottomless pit, and go into perdition: and they that dwell on the earth shall wonder, whose names were not written in the book of life from the foundation of the world, when they behold the beast that was, and is not, and yet is. 9 And here is the mind which hath wisdom. The seven heads are seven mountains, on which the woman sitteth. 10 And there are seven kings: five are fallen, and one is, and the other is not yet come; and when he cometh, he must continue a short space. 11 And the beast that was, and is not, even he is the eighth, and is of the seven, and goeth into perdition. 12 And the ten horns which thou sawest are ten kings, which have received no kingdom as yet; but receive power as kings one hour with the beast. 13 These have one mind, and shall give their power and strength unto the beast. 14 These shall make war with the Lamb, and the Lamb shall overcome them: for he is Lord of lords, and King of kings: and they that are with him are called, and chosen, and faithful.

15 And he saith unto me, The waters which thou sawest, where the whore sitteth, are peoples, and multitudes, and nations, and tongues.

Mystery Babylon sits on peoples multitudes, and nations, and tongues.
This is the leadership of the United States over the United Nations located in New York City a few miles from the Statue of Liberty. Ever nation on earth is represented here. 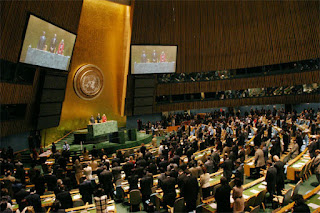 16 And the ten horns which thou sawest upon the beast, these shall hate the whore, and shall make her desolate and naked, and shall eat her flesh, and burn her with fire. 17 For God hath put in their hearts to fulfill his will, and to agree, and give their kingdom unto the beast, until the words of God shall be fulfilled. 18 And the woman which thou sawest is that great city, which reigneth over the kings of the earth.

Mystery Babylon is a woman that is a great city  which reigneth over the kings of the earth.
This is New York City ruling by the United Nations. America is also the world ruling superpower. 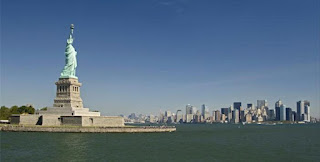 Revelation 18
1 And after these things I saw another angel come down from heaven, having great power; and the earth was lightened with his glory. 2 And he cried mightily with a strong voice, saying, Babylon the great is fallen, is fallen, and is become the habitation of devils, and the hold of every foul spirit, and a cage of every unclean and hateful bird.

3 For all nations have drunk of the wine of the wrath of her fornication, and the kings of the earth have committed fornication with her, and the merchants of the earth are waxed rich through the abundance of her delicacies. 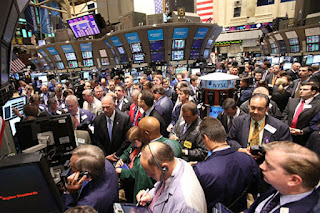 4 And I heard another voice from heaven, saying, Come out of her, my people, that ye be not partakers of her sins, and that ye receive not of her plagues. 5 For her sins have reached unto heaven, and God hath remembered her iniquities. 6 Reward her even as she rewarded you, and double unto her double according to her works: in the cup which she hath filled fill to her double. 7 How much she hath glorified herself, and lived deliciously, so much torment and sorrow give her: for she saith in her heart, I sit a queen, and am no widow, and shall see no sorrow. 8 Therefore shall her plagues come in one day, death, and mourning, and famine; and she shall be utterly burned with fire: for strong is the Lord God who judgeth her. 9 And the kings of the earth, who have committed fornication and lived deliciously with her, shall bewail her, and lament for her, when they shall see the smoke of her burning,

Mystery Babylon  is a city that has the people of God and spoiled rich people and this city will be engulfed with a famine in one day, then utterly destroyed by fire.
This is the nerve gas attack followed by a nuclear explosion that will completely destroy New York City and other city's in the destruction of America. 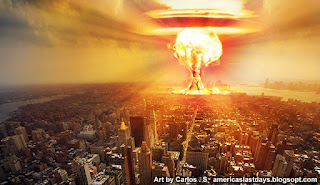 10 Standing afar off for the fear of her torment, saying, Alas, alas, that great city Babylon, that mighty city! for in one hour is thy judgment come.

Mystery Babylon is a Great and powerful city.
This is New York City the greatest city in the world and it will be destroyed in one hour.
It may be one literal hour or at the end of the 7 year Tribulation hour. 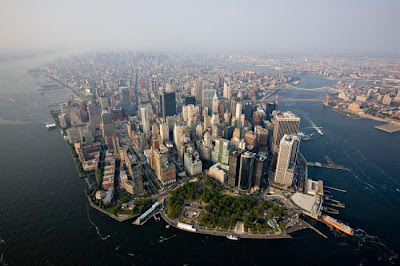 11 And the merchants of the earth shall weep and mourn over her; for no man buyeth their merchandise any more: 12 The merchandise of gold, and silver, and precious stones, and of pearls, and fine linen, and purple, and silk, and scarlet, and all thyine wood, and all manner vessels of ivory, and all manner vessels of most precious wood, and of brass, and iron, and marble, 13 And cinnamon, and odours, and ointments, and frankincense, and wine, and oil, and fine flour, and wheat, and beasts, and sheep, and horses, and chariots, and slaves, and souls of men. 14 And the fruits that thy soul lusted after are departed from thee, and all things which were dainty and goodly are departed from thee, and thou shalt find them no more at all.

Mystery Babylon is a rich city that sells merchandise of all kinds to the merchants of the earth.
This is New York City selling all merchandise in the United States Stock exchange located in New York City.

15 The merchants of these things, which were made rich by her, shall stand afar off for the fear of her torment, weeping and wailing, 16 And saying, Alas, alas, that great city, that was clothed in fine linen, and purple, and scarlet, and decked with gold, and precious stones, and pearls! 17 For in one hour so great riches is come to nought. And every shipmaster, and all the company in ships, and sailors, and as many as trade by sea, stood afar off, 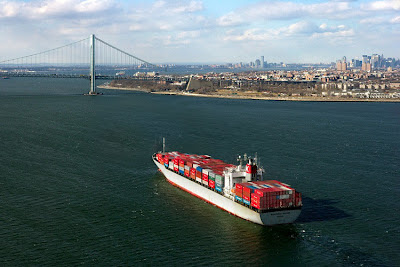 18 And cried when they saw the smoke of her burning, saying, What city is like unto this great city! 19 And they cast dust on their heads, and cried, weeping and wailing, saying, Alas, alas, that great city, wherein were made rich all that had ships in the sea by reason of her costliness! for in one hour is she made desolate. 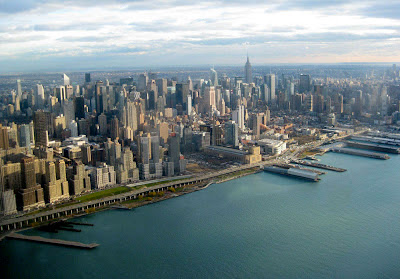 20 Rejoice over her, thou heaven, and ye holy apostles and prophets; for God hath avenged you on her. 21 And a mighty angel took up a stone like a great millstone, and cast it into the sea, saying, Thus with violence shall that great city Babylon be thrown down, and shall be found no more at all.

Mystery Babylon is a city that will be destroyed by the sea after it is made desolate.
This is the destruction of New York city by a large tsunami in the last hour. 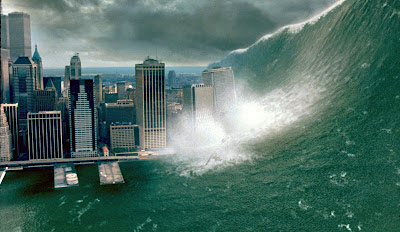 Mystery Babylon is New York City and it will be destroyed by a biological attack and nuclear detonation and then utterly destroyed by a tsunami along with other portions of America. The people of God are commanded to get out of this city or you will partake of its destruction. 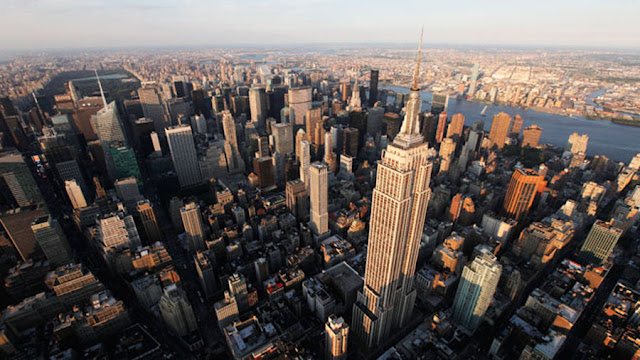