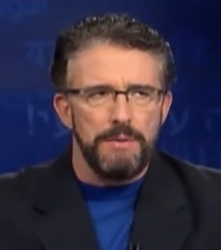 In 1996 perry stone had a vision from the Lord of a warning of a future terrorist attack upon America that will steal all the wealth in the nation in 5 calamities.

In the vision he was walking up a paved road that went up a hill. He saw homes to the side that was filled with retired ministers and he was stopped by a concrete wall. When he climbed over the wall he saw a beautiful field of corn growing far into the distance.

At the end of the field there stood a dark tower covered by a dark cloud and at its base there ran across old fashion power lines. and at the center of the field lay a water cistern filled with water.  From the clear sky there descended 5 grey tornadoes to the edge of the field. 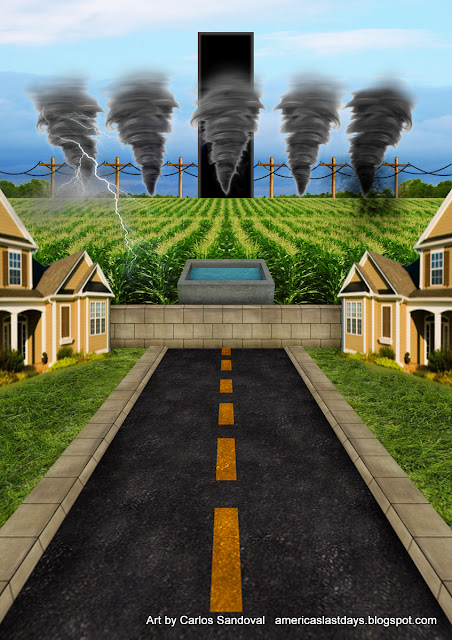 Then the first tornado ripped a row of corn by the roots then the 2nd, the 3rd, the 4th, and the 5th all ripped the corn to the wall. This left the entire field behind the wall completely bear. 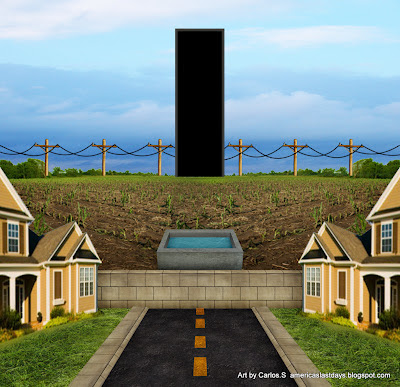 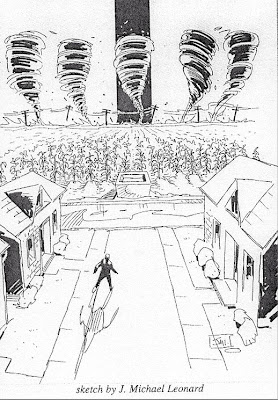 In the vision, I saw a straight paved road that led to the top of a hill. On either side of the road were small brick homes. For some reason I felt they were homes of retired ministers. I began walking up the hill, stepping on a sidewalk on the left side of the road. It was then that I noticed I was barefoot.
As I continued up the hill, I noticed two strange sights. At the top was a large concrete barrier, like a wall. I knew something was behind this barrier. I also noticed the sky was perfectly blue, except for one dark pillar of black (a cloud) that resembled a black tower reaching from heaven to earth. It was hitting the earth somewhere behind the barrier. I thought, "How strange! Everything looks great, but this one dark cloud is coming from heaven to earth". I decided to go to the top of the hill and investigate the scene.
After reaching the top, I climbed up on the concrete wall. To my amazement, a beautiful corn field was behind the barrier. As far as I could see to the left and right, the field stretched, filled with the most beautiful ripe corn I had ever seen. The rows were close together and the corn was ready for harvest. I could see the golden tassels on top of the stalk.

In the distance, the scene was much different. At the far edge of the field I saw five large tornado's. They each were the same size and seemed to be spaced equally. To me, it seemed they were coming out of this large dark pillar.
As I observed the five Tornado's, I recall seeing old fashioned power lines directly behind the tornado's. Suddenly, the tornado on the left began to spin. I could hear a whooshing sound as it slowly began to gain speed. Then I saw sparks, similar to bits of lightning, coming from the first tornado. That is when I knew what was going to happen.
I sensed that soon, the first tornado would rip through the corn field and take out a row of precious grain. By the time this tornado would reach the barrier, the second would rip a row of grain out, followed by a third, a forth, and finally the fifth tornado. I knew that when the fifth tornado hit, it would conclude this strange storm.
I recall jumping off the concrete barrier, running down the hill and shouting, "I must get into the cleft of the rock. The storms are coming, and I must get into the cleft of the rock!"
Suddenly, I came to myself. My heart was pounding and my spirit was weeping. I jumped off the bed and knocked on the door of Don Channell. I began telling him about the vision. Don and I were not certain of the meaning, but the vision has stayed with me for the last three years. 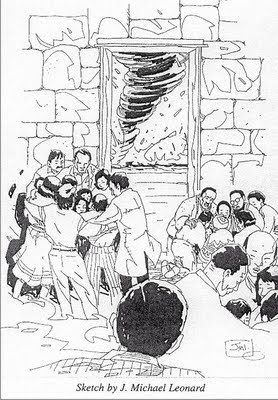 About six months later I had a night dream that I believed to be related to the vision of the five tornado's.
In the dream, I was standing in the inner city of some great metropolis and heard people saying, "The storm is coming. We must find shelter and protection". I led the people into the basement of a large, old church. The church building was built from the large granite blocks that many of the historic downtown churches are made of. I saw people from various ethnic groups - Black, Hispanic and Asian. People were huddled together with their particular ethnic group. They were all frightened and cold, holding on to each other. Great fear gripped each person. Suddenly, a huge tornado hit the building. The church began to shake, but did not collapse. I noticed there was no doors in the church (because Jesus is the door).
I could see these large tornado's, five in all, as each one roared by and struck the church. I could hear the pounding of rain and hail as it beat against the outside of the building. 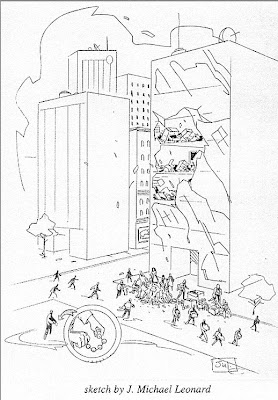 After the fifth tornado passed by, there was a calm. Everyone went outside to inspect the damage.As we left the church basement, I saw several piles of different items. Some piles contained canned food. Others contained clothing. There were even piles of small toys for children. Some of the people began to run for cans of food, while several others rummaged through the clothes and still others were seeking a toy for their small child. It is what I saw at that moment that confounded and amazed me.
As the scene changed, I could clearly see the skyline of a large city, complete with tall skyscrapers. I looked for structural damage and found that the damage was not to the exterior of the buildings, but to the inside of the buildings instead. Still, not every building was affected. Some looked perfectly normal. Others seemed to have taken a harder hit. In one glass building, I noticed that the file cabinets were opened and papers were all over the floor. It seemed confusion had hit this office. Yet, two other buildings across from this damaged building appeared to have come through the storm without any major damage.