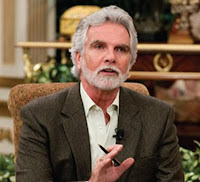 John Paul Jackson had a vision from the Lord of Prophetic events in the future of America that would happen in the next 10 years from 2008 called The Perfect Storm.

A storm is coming in waves over the next 10 years because the church is not the backbone of America any more and the lord is taking his hands off of the Nation.

America will have earthquakes and large storms during a collapse of the economy. The dollar will fall and lose its value leaving many riots in cities across the nation. Many business and churches will disband for the economic depression that will require a new American currency to be established.
Israel will be attacked and will have to defend itself from Iran and this will cause gas prices to rise in price. This will empower Russia to develop itself into a stronger nation in support of Iran. Islam will take a higher place in America and one US coastal city will be uninhabitable because of a nuclear dirty bomb.
There will be a migration to rural lands out of the city.

This is the time to prepare spirituality and physically with Food, water and Supply's before 2018

1...There will be woes in 2012
2...The jet streams will go wiled and cause major weather shifts around the world
3...There will be droughts in some areas and water will become more expensive than oil and some cities will evacuate thousands because there is not enough water to meet there needs and Jesus will make rain in one city and no rain on another city.
4...Coastal cities will experience earthquakes and there will be a major earthquake in the mid west first before this time.
5...A volcano will become active and erupt in the again.
6...The will be thunderstorms with softball size hail and 24in of rain in 24 hrs.
7...There will be places with 3 ft of snow in 6 hrs.
8...Tornadoes will hit with 350 mph winds in unusual places.
9...A hurricane with 180 mph winds will have a diameter of 500 miles and have storm surges
150 miles inland.
10...A blight will hit a type of hybrid seed as a strike of God
11...The storms will disrupt food harvest and there will be a national food shortage in food storage.
12...There will be an epidemic that will kill many and it will start from another country and come to
13...There will be signs in the sun moon and stars as the prophet Joel spoke of.
14...The bubble around our solar system will weaken and come in to cause a new form of skin disease.
15...The magnetic filed will shift and will form cracks that allow solar winds to effect weather patterns.
This will also cause communication problems with plans and cell phones and cable TV.

1...A dirty bomb will explode in a port city in the
2... will have devastating attacks that will involve nuclear material being released.
3... will respond with missile strikes and will eventually bomb and this will cause fuel prices to rise again.
4... will enhance this tension in the by creating an oil crisis.
5...Russia will try to take control of Ukraine and continue to give Iran weapons to further ignite the oil crisis because with conflict in the middle east oil will escalate because Russia need the oil to rebuild itself once again as a new mother Russia.
6...When president hosni mubarak is no longer the leader of a new terrorist leadership will take his place and terrorisms will take a higher profile than before.
7... will become more terrorist oriented and become more of a harbinger of terrorist.

1...There will be a bubble of hope in the economy but it will be short lived but in that span there will be enough time for godly people to make the necessary adjustments but it will not be a time to take on more debt.
2...Commercial paper and credit card problems is a domino that will fall as jobless ness increases and buildings lay empty.
3...Malls will lay more than half empty and stores remain closed and strip malls also with this no one is leasing the buildings that the owner needs to service the debt of the building so this will make commercial paper problems also with lending institutions.
4...There will be waves of stagflation deflation and hyper inflation but God will guide those investors he can trust
5...The dollar will loose value and become on par with the paso.
6...A new north American currency is going to be established as the euro like an amero.
7...There will be reports of many new finical corruptions uncovered in the years that lie ahead.
8...People will start to grow there own food in some cities and in 1 or 2 cities he saw men ripping up the streets to try to grow food.

1...Pray for president Obama and his protection because there is a plane by Islam to try to take his life to start riots as destabilization to divert attention from there activities.
2...We will see the worst riots in history in it will be race riots but more economic in nature (all the African American people in the inner city).
3...Economic difficulty will cause mobs to roam the streets with a robin hood mentality of taking from the rich to give to the poor.
4...There will be many new corruption reports at very high levels.
5...Terrorist activity will hit again as a flaw in the border protection is discovered by our enemies.
6...Rural land will become more valuable as people leave the cities to seek the security of a urban lifestyle.
7...Social security and retirement accounts will become of little value.
8...As the economic crisis continues will bring home most of its troops to save finances.
9...Because of the economic severity will cut much of its foreign aid to developing countries and the results of this is a growth of international dictators and Islam will multiply.

1...Islam will force its way into school systems by demanding time to pray.
2...Islam will work to take control of a large American city ??? it could be as they begin a multiplication project …???
3...Islam will continue to make threats to influence congressional decisions.
4...Islam will initiate a plan to have a president by 2024.
5...medical advances and organ transplants will make it possible for homosexual men to be in vitro fertilized and give caesarian births.
6...Many churches will file for bankruptcy as payments to large buildings can not be made.
7...Large ministries will disband from financial difficulty.
8...House churches will begin to grow as a need for intimacy increases.
9...Hidden sexual perversion will be exposed and the numbers will be shocking.

Jeremiah 18:11 Now therefore go to, speak to the men of Judah, and to the inhabitants of Jerusalem, saying, Thus saith the LORD; Behold, I frame evil against you, and devise a device against you: return ye now every one from his evil way, and make your ways and your doings good.

1...Food will be multiplied after prayer on empty plates.
2...Leaders arise in the midst of turmoil and people with ideas will meet peoples needs and
people with innovations will facilitate systemization and supernatural wisdom of secrets to
people of the lord.
3...The lord will pour out his spirit on all flesh so align yourself to receive it.