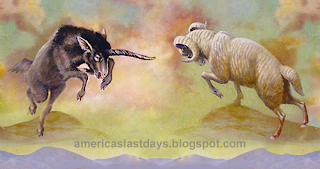 In Daniel chapter 8 Daniel had a vision from the Lord of the soon coming Antichrist and a time frame of 2300 years for his arrival around the year 2025 and upwards.

In the vision  he saw a ram being killed by a goat representing the invasion of media and Persia by the Greek empire in 336 b.c.
After the goat conquered in the land its horn was broken off representing the sudden death of a king which was Alexander the great after his establishment of the Greek empire in 323 b.c..
When the great horn was broken off 4 notable horns took its place and it was said that 4 kingdoms would arise after the death of the first king of the Greek empire. This has proven to be the creation of the 4 kingdoms divided from the Greek empire in 275 b.c. from Alexander the great's 4 generals which fought for power until there deaths in 275 b.c. called the wars of Alexanders successors.

The 4 kingdoms of the Greek empire in 275 b.c after the death of Alexander the great in 323 b.c. are 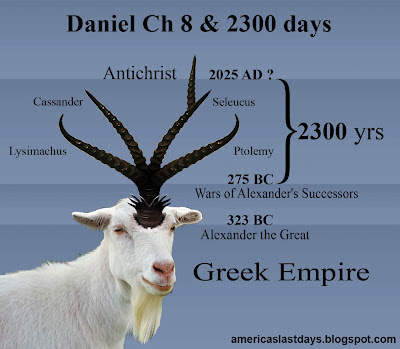 Then the vision moved to the end of days in the time of the antichrist where he will rise as a small horn out of the 4 horns and he will set up the transgression of desolation, cast down some of the stars of heaven to the ground, cast down the sanctuary and make war with Jesus at his coming. At this time the antichrist will be destroyed and Jesus will set up the final kingdom at the end of Daniel chapter 8.

This Gives an estimated time for the arrival of the Antichrist  from 2025 and upwards. 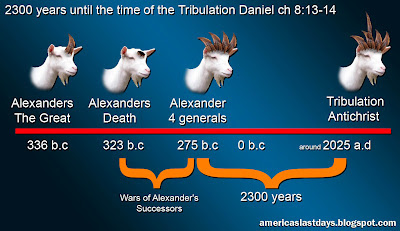