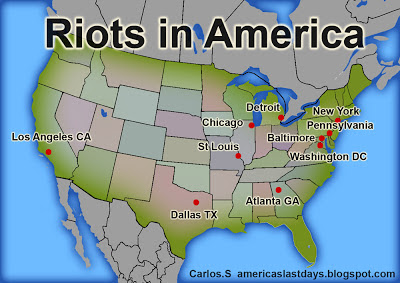 John Paul Jackson had a vision from the Lord in 1985 of riots coming to America and financial collapse of the economy which will lead  to devastating riots across the Country. The Riots will Happen just Shortly after the next election and the anger will be so bad that martial law will be declared.
The 6 cities under martial law in the future are Los Angeles CA, Dallas TX, Atlanta GA, Detroit MI and New York city. These cities will see the worst riots in American history and unrest will be all across the nation.

The riots in America is due to the fall of the dollar and the financial crisis created by the big banks. If Barack Obama wins the election in 2012 due to a unseen event it may only serve as the trigger to an already volatile America.