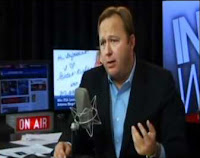 Alex Jones is a radio talk show host with infowars.com. He predicted 9/11 and laid out a plan by secret financial globalist at the top of our government to destroy America and create a New World Order.

There is a Conspiracy against the American people and our leaders have betrayed us and we are to be killed and controlled into mindless puppet slaves for the elite.