Dream The Destruction of America

I had a dream from the Lord about the destruction of America before the creation of this blog.
I was standing near a water fountain and from the sky the hand of the lord came down and filled a golden cup with the water of the fountain. I looked at the cup and i saw Jesus dieing on the cross. When i saw this i saw a ship come from this cup and sailed to a map of America across the Atlantic Ocean then it sailed across America itself in the air. 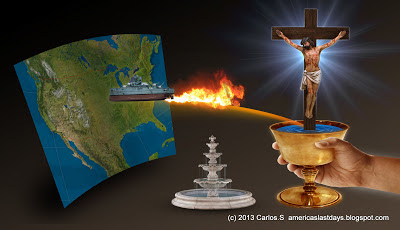 The ship then left a tail of fire which stretched across 2 3rds of the land of the United States filled with fire from the Mississippi river to  the west coast of California. but the east coast was covered by sea. 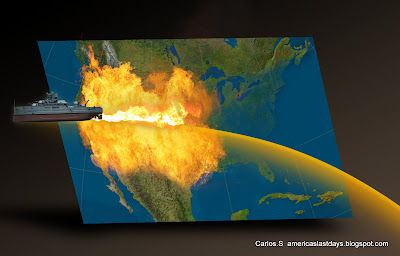 The Interpretation
The cup represents the drink that America must take and it is filled with the persecution of the cross. There will be an invasion of America by sea. This attack will burn America with fire from coast to coast but after the invasion the sea will cover the majority of the east coast.

Make no mistake America is Mystery Babylon in Revelation ch 17 and 18 and will be judged by fire at the end of the tribulation.