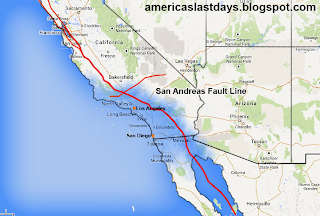 After This Storm California will be hit with an Earthquake Disaster hat will create an inland ocean stretching from Los Angeles To San Diego along the San Andreas Fault Line making Baja California an island.  This will leave Southern California in ruins and strengthen the Economic Collapse of America.