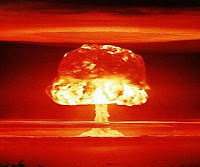 U.S. Army Chief threatens war with Russia and declarers that Russia and china have been building up there military to take down America in the near future. Based on Joel Skousen world war 3 will begin around or after 2023 when Russia and china have built up its military after or during a financial collapse of the U.S. economy while mobilizing Islamic terrorism to support martial Law and unifying the United Nations into a one World Government which will be given to china. Media is in total black out