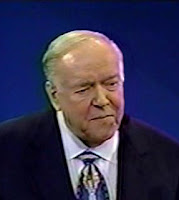 As I looked to the west, I saw what appeared to be a tiny dot on the horizon. It was the only moving thing I could see. As I watched, it grew larger and came toward me, taking on shape and form. Soon I could see it was a horse. As it came closer I could see a man upon the horse. He was riding toward me at full speed. As he approached, I could see he held the reins of the horse's bridle in his right hand, and in his left hand, high above his head, he held a scroll of paper.

When the horseman came to me, he pulled on the reins and stopped. I stood on his right. He passed the scroll from his left hand to his right hand and handed it to me. As I unrolled the scroll, which was a roll of paper 12 or 14 inches long, he said, "Take and read." At the top of the page in big, bold, black print were the words "WAR AND DESTRUCTION." I was struck dumb. He laid his right hand on my head and said, "Read, in the Name of Jesus Christ!"

I turned to read the scroll again, and then looked and saw what I had just read about. I saw many women—old women with snowy white hair, middle-aged women, young women and teenagers. Some of the younger ones held babies in their arms. All of the women were bowed together in sorrow and were weeping profusely. Those who did not carry babies held their hands on their stomachs as they bowed over and wept. Tears flowed from their eyes like water.

I looked at the scroll again, and again I looked to see what I had read about. I saw the skyline of a large city. Looking closer, I saw the skyscrapers were burned-out hulls. Portions of the city lay in ruins. It was not written that just one city would be destroyed, burned and in ruins, but that there would be many such cities.

The scroll was written in the first person, and seemed as if Jesus Himself were speaking. I read: "America is receiving her last call. Some nations already have received their last call and never will receive another."

Then, in larger print it said, "THE TIME OF THE END OF ALL THINGS IS AT HAND." This statement was repeated four or five times. Jesus also said this was the last great revival. He went on to say: "All the gifts of the Spirit will be in operation in the church in these last days, and the church will do greater things than even the early church did. It will have greater power, signs and wonders than were recorded in the Acts of the Apostles."
Posted by cgman