Prophecy of the Popes, Tribulation around 2025 Return of JESUS around 2033 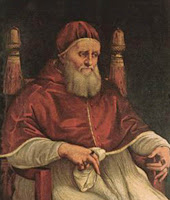 Saint Malachy was an archbishop in 1132 a.d. and he had a vision from the Lord of the identity of all 112 popes in history before the return of Jesus Christ to earth just after the 7 year tribulation and the end of the world.

For the past 900 years the Prophecy of the Popes has been identifying each pope and that there would only be 112 popes in history until the return of Jesus Christ at the end of the 7 year tribulation. We are now within the 112th pope the last pope with Pope Francis age 79. This means Jesus might return within 20 years from now around the year 2035 and the tribulation will begin from 2017 to 2025

The 112th popes description for the future is

He will reign during the ultimate persecution of the Holy Roman Church.
112 Peter the Roman, who will nourish the sheep in many tribulations; when they are finished, the city of seven hills will be destroyed, and the fearsome Judge will judge His people. The End.
The 112th pope is the  last pope that will endure the tribulation and see the destruction of the city of 7 hills. The city of 7 hills represents New York City called Mystery Babylon ruling over the 7 kingdoms of of the earth the beast in revelation ch 17.