1 Thessalonians 4
15 For this we say unto you by the word of the Lord, that we which are alive and remain unto the coming of the Lord shall not prevent them which are asleep. 16 For the Lord himself shall descend from heaven with a shout, with the voice of the archangel, and with the trump of God: and the dead in Christ shall rise first: 17 Then we which are alive and remain shall be caught up together with them in the clouds, to meet the Lord in the air: and so shall we ever be with the Lord. 18 Wherefore comfort one another with these words. 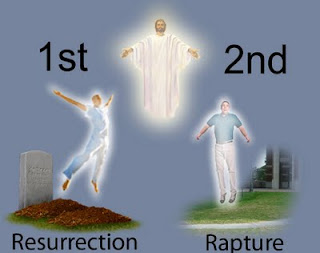 20 But now is Christ risen from the dead, and become the firstfruits of them that slept. 21 For since by man came death, by man came also the resurrection of the dead. 22 For as in Adam all die, even so in Christ shall all be made alive. 23 But every man in his own order: Christ the firstfruits; afterward they that are Christ’s at his coming. 24 Then cometh the end, when he shall have delivered up the kingdom to God, even the Father; when he shall have put down all rule and all authority and power.

40 And this is the will of him that sent me, that every one which seeth the Son, and believeth on him, may have everlasting life: and I will raise him up at the last day.

44 No man can come to me, except the Father which hath sent me draw him: and I will raise him up at the last day. 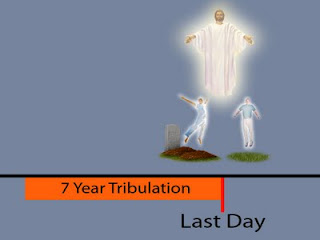 27 And he shall confirm the covenant with many for one week: and in the midst of the week he shall cause the sacrifice and the oblation to cease, and for the overspreading of abominations he shall make it desolate, even until the consummation, and that determined shall be poured upon the desolate.

11 And from the time that the daily sacrifice shall be taken away, and the abomination that maketh desolate set up, there shall be a thousand two hundred and ninety days. 12 Blessed is he that waiteth, and cometh to the thousand three hundred and five and thirty days. 13 But go thou thy way till the end be: for thou shalt rest, and stand in thy lot at the end of the days. 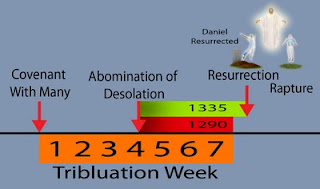 1 Corinthians 15
51 Behold, I shew you a mystery; We shall not all sleep, but we shall all be changed, 52 In a moment, in the twinkling of an eye, at the last trump: for the trumpet shall sound, and the dead shall be raised incorruptible, and we shall be changed. 53 For this corruptible must put on incorruption, and this mortal must put on immortality. 54 So when this corruptible shall have put on incorruption, and this mortal shall have put on immortality, then shall be brought to pass the saying that is written, Death is swallowed up in victory. 55 O death, where is thy sting? O grave, where is thy victory? 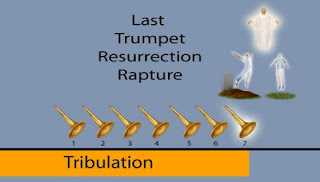 15 And the seventh angel sounded; and there were great voices in heaven, saying, The kingdoms of this world are become the kingdoms of our Lord, and of his Christ; and he shall reign for ever and ever. 16 And the four and twenty elders, which sat before God on their seats, fell upon their faces, and worshipped God, 17 Saying, We give thee thanks, O Lord God Almighty, which art, and wast, and art to come; because thou hast taken to thee thy great power, and hast reigned. 18 And the nations were angry, and thy wrath is come, and the time of the dead, that they should be judged, and that thou shouldest give reward unto thy servants the prophets, and to the saints, and them that fear thy name, small and great; and shouldest destroy them which destroy the earth. 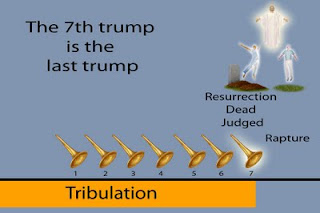 12 So man lieth down, and riseth not: till the heavens be no more, they shall not awake, nor be raised out of their sleep.

Revelation 6
12 And I beheld when he had opened the sixth seal, and, lo, there was a great earthquake; and the sun became black as sackcloth of hair, and the moon became as blood; 13 And the stars of heaven fell unto the earth, even as a fig tree casteth her untimely figs, when she is shaken of a mighty wind. 14 And the heaven departed as a scroll when it is rolled together; and every mountain and island were moved out of their places.

Revelation 7
13 And one of the elders answered, saying unto me, What are these which are arrayed in white robes? and whence came they? 14 And I said unto him, Sir, thou knowest. And he said to me, These are they which came out of great tribulation, and have washed their robes, and made them white in the blood of the Lamb. 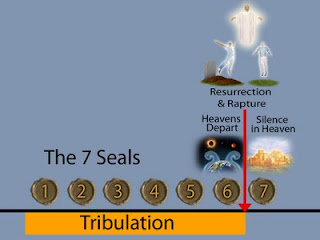 Matthew 24
29 Immediately after the tribulation of those days shall the sun be darkened, and the moon shall not give her light, and the stars shall fall from heaven, and the powers of the heavens shall be shaken: 30 And then shall appear the sign of the Son of man in heaven: and then shall all the tribes of the earth mourn, and they shall see the Son of man coming in the clouds of heaven with power and great glory. 31 And he shall send his angels with a great sound of a trumpet, and they shall gather together his elect from the four winds, from one end of heaven to the other.

Mark 13
24  But in those days, after that tribulation, the sun shall be darkened, and the moon shall not give her light, 25  And the stars of heaven shall fall, and the powers that are in heaven shall be shaken. 26  And then shall they see the Son of man coming in the clouds with great power and glory. 27  And then shall he send his angels, and shall gather together his elect from the four winds, from the uttermost part of the earth to the uttermost part of heaven. 28  Now learn a parable of the fig tree; When her branch is yet tender, and putteth forth leaves, ye know that summer is near: 29  So ye in like manner, when ye shall see these things come to pass, know that it is nigh, even at the doors. 30  Verily I say unto you, that this generation shall not pass, till all these things be done. 31  Heaven and earth shall pass away: but my words shall not pass away.