Dr. Daniel Daves had a dream from the Lord of the coming collapse of the American economy and the Future of America.

He was  Standing in downtown Dallas Texas filled with other people waiting for an announcement. He noticed big screens around the city in front of large buildings. There was a great calm in the people.  A government official then appeared on the big screens and gave an announcement.

He said
"Ladies and gentlemen, I have an announcement to make.  America as you have known it has ceased to exist.  All property lines have been dissolved, and the U.S. Dollar is worthless."

When the people heard of this there was panic and people frantically ran from the city's.  There was danger in the streets and people began to run west in the nation.

He found himself in a gas station next to an Indian man and saw families trading items for gasoline in a barter trade. People traded power tools and equipment , anything of value for gasoline. The man in the store said i do not take American Dollars.

He was then taken to a war room filled with video screens around the wall. The room was filled with advisers with  President George W. Bush at the center of the room. This was towards the end of his presidency. He was frustrated and tired of the counselors around him . A man next to him told him that "the presidents was tired from battle and he was fighting a great and powerful enemy  and that Enemy is Communism."

There are clear symbols in the dream which give us clues to the future of America.
Daniel Dave had the dream in 2008 reveling the future of America in the financial collapse in which he  says resembles the 2012 movie -Atlas Shrugged II. This movie takes place as an economically devastated America  that takes place after the year 2017 and may be prophetic of a real future collapse around that time. 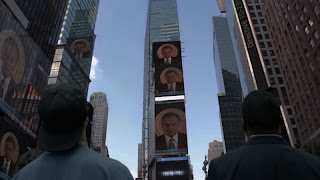 John Paul Jackson agrees with this time frame and said there will be an economic collapse of America 10 years from 2008. This may be 2018.