9/11 is the greatest conspiracy in world history and without any doubt a complete and utter lie. Our government is hiding important truth about this tragedy and is instead using it to tear up the very fabric of the constitution in preparation for the economic collapse and martial law which will be used to create a one world government.

The truth is clear as day and you must ask yourself were is the cry from church leaders. This government is ready to kill the people of this nation in total unrestrained slavery.  With no thirst for truth the lies have deceived millions in total obedience in the creation of a new world order. I charge the Preacher to act now instead of spreading compromise.

Pentagon
A 757 plane is 120 feet from wing tip to wingtip but the hole in the pentagon was only 40 to 60 feet wide and the roof did not collapse until a time later. This recreation clearly shows that this plane was to big to cause such a small amount of damage to the pentagon.
You also can not find any plane wreckage in all the photos its just like the plane disappeared on impact.

Flight 93
We were told that passengers aboard  flight 93 crashed in Pennsylvania. With no doubt this is fare from the truth. There is absolutely no plane wreckage at the crash site that is any larger than a few feet. There are also reports that plane wreckage was spread over several miles. So where is the plane. The hole is even too small for a 757. 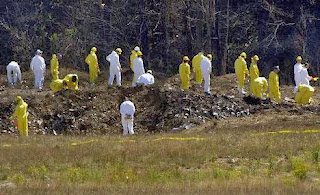 World Trade Center
Both towers fell at free fall speed under 7 or 8 seconds which absolutely impossible. Molten steel was found underneath the debri proving that high explosives where used to bring the buildings down. 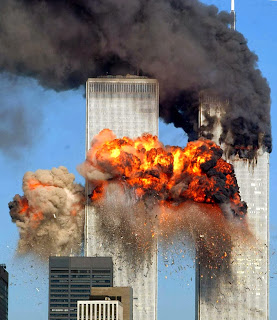 Building 7
Building 7 Was not hit by any plane but fell at free fall speed with absolutely no resistance. This is only possible in controlled demolition with floor by floor explosives.

Only an unwitting fool would believe the official 9/11 fairy tail.