Richard Wolff Capitalism is a joke 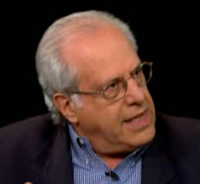 Richard Wolff is an economist teacher of government systems and he says that American Capitalism is a system of slavery. For all we sing democracy in America, we have none of it at work and Capitalism makes men rich and makes men poor and nothing in between thats the truth.
The number one enemy of the state is a rich man who will give poorly to his workers and in turn make them do all the more work. These men are wild men and have no boundary to exploit other men and expand there borders as they enjoy the fruits of your labor. While they make 50 or 100 or 1000 dollars an hour you make 5 to 10 dollars an hour while they go overseas and pay foreign workers .18 cents an hour driving people to suicide. So from the bottom of my heart i speak to the rich man you cold hearted  bastard how dare you.
Posted by cgman