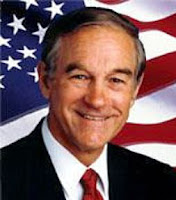 Ron Paul is an American politician that severed in the house of representatives for many years. warning of an economic collapse in the united states around the year 2020 and has made many attempts to change and stop the corruption in congress that has led to the destruction of Americas foundation as a society. 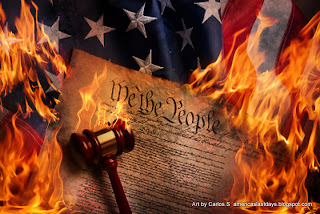 With the Presidency George W Bush and Barack Obama  the Constitution is gone. Every freedom that has be fought for for the past 100 years has been traded for peace and safety while America spins in a  never ending economic prison called the free market. This Nation is not free When every man woman and child is held captive by a never ending debt from the federal reserve and a health care system that steals every dime you have.  When each American looks for a job that has been shipped to a foreign nation just to walk past armed guards looking for bombs in your underwear. While The army supports and arms al qaeda in the middle east.
The President, the congress, the Supreme court, the people have abused there authority and ignored there responsibility. Now America faces its own destruction while we hold dear the rights of every man to do as he wilt in his sexual preference while we ignore every issue in our slowly decaying city's which have billions of dollars in secret accounts that no man can touch.


Warning Future of America
He is warning the people to prepare for the coming collapse to own land, silver, food and water. The government will not save anyone as they brought about this destruction through the federal reserve banking institutions which have stolen from the people to serve the elites.